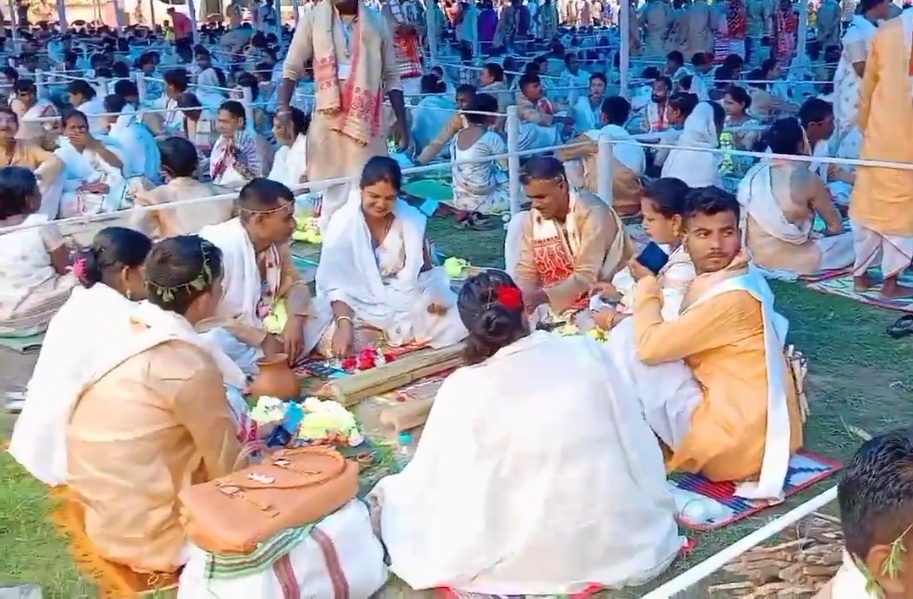 North Lakhimpur: A mass wedding ceremony was held in North Lakhimpur and nearly six hundred couples performed the rituals of tying the knot according to traditional religious customs.

The mass wedding ceremony was organized by the Vivah Sanskar Smity-Lakhimpur in association with the Hans Foundation, New Delhi.

For the occasion, a massive pandal was erected at Tyagkshetra in northern Lakhimpur where 588 couples, mostly married for years without any social ritual or recognition, ceremoniously tied their nuptial knots provided by the organizers.

Speaking on the occasion of Tapan Bezbaruah, the event organizer said the mass wedding ceremony was organized to bring all marriages within the society whose status had not been socialized or formalized according to religious customs.

“Couples who marry themselves remain married until they die and on some occasions villagers or neighbors refuse to carry the dead for cremation for that marital status. Therefore, with the aim of making these couples our religious fold, we are holding this mass ceremony,” another event organizer said.

It can be mentioned that the New Delhi-based Hans Foundation, established in 2009, is a public charitable trust that provides financial support to non-profit organizations in India. The main focus areas of the organization are education, health, livelihoods and disability.